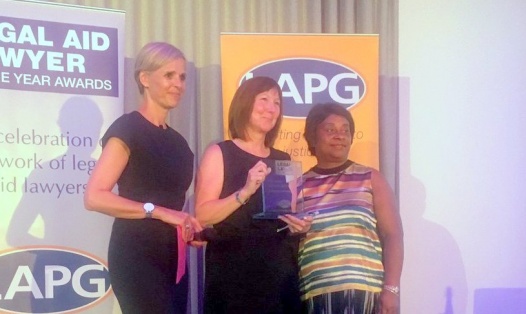 Several Law Centre accomplishments recognised last night at the Legal Aid Lawyer of the Year (LALY) awards were crowned with a surprise win in the last category, celebrating outstanding achievement.

The annual awards ceremony, organised by the Legal Aid Practitioners Group, celebrates excellence in publicly funded legal work, which caters for people in poverty and disadvantage.

Sue James, housing solicitor at Hammersmith and Fulham Law Centre (HFLC), received her LALY to cheers and applause. Unlike other categories, no nominations are accepted for outstanding achievement; instead, the judging panel selects a winner of exceptional merit.

Previous recipients of this award include the lawyers for the Hillsborough families; the charity Public Law Project; and campaigner Baroness Doreen Lawrence, who also presented the awards at last night's ceremony.

Sue James was recognised for being an exceptional legal aid all-rounder. A leader in her professional and local community, with several landmark cases under her belt, she has been with HFLC for 12 years, through a challenging period of austerity cuts to legal aid.

Sue also led the team that has set up Ealing Law Centre four years ago, to revive what had been a local legal advice 'desert' for some time. She continues to serve as trustee of her home borough's Law Centre.

Most recently, Sue has been blogging about the hardship and humanity she encounters at the court duty solicitor desk. Her posts in online maganize Legal Voice relate her clients’ stories "because I want other people, not just us lawyers, to see what we see."

"I wanted to be a solicitor in a Law Centre... Law Centres just do things differently. I love that we get to go from the food bank - to the Supreme Court.

"I know from my many years representing tenants that good housing changes people's lives. Decent, safe, affordable housing should be a basic right... And when it goes wrong people need access to legal aid... 'Austerity justice' just isn't working.

Harrow Law Centre was also shortlisted for a LALY in the best firm/not-for-profit category, but was beaten to the prize by Birmingham's Community Law Partnership. Nevertheless, the recognition as finalist was well-warranted: from a modest start only seven years ago in a borough with a large disadvantaged, migrant and BAME population, that had never had a local Law Centre, it has grown steadily, combining casework and advocacy to great success.

A third Law Centre got an honourable mention at the very start of proceedings. LAPG co-chair, Jenny Beck, led a packed hall in applauding North Kensington Law Centre and its many collaborators, for their ongoing work of assisting survivors of the Grenfell Tower disaster.

Our heartfelt congratulations go out to Sue James, Harrow Law Centre and North Kensington Law Centre. Your accomplished work is the embodiment of the Law Centres spirit and we are very proud of you!

For more details about this story please contact Nimrod at the Law Centres Network on 020 3637 1330 or at nimrod@lawcentres.org.uk.

"LALY17: 'I love it that we get to go from the food bank to the Supreme Court'" - Legal Voice