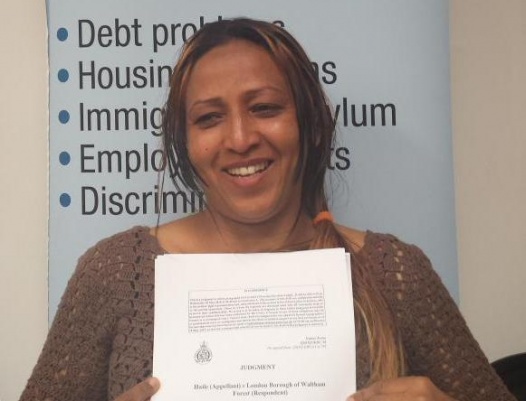 Hackney Community Law Centre today celebrates a legal victory as the Supreme Court rules in favour of their client's appeal, challenging a local authority's decision that she was 'intentionally homeless'.

Heavily pregnant, Saba Haile was housed by the London borough of Waltham Forest on a temporary basis in a hostel in Leyton. However, the hostel only accommodated single people, which meant that once she has given birth she would have been homeless again. Knowing this, Ms Haile left it for another temporary accommodation which she had found elsewhere. Sadly, she had to leave this accommodation as well when it became overcrowded, so was homeless again.

From the point of her leaving their Leyton hostel, Waltham Forest council have considered Ms Haile 'intentionally homeless' and, on that basis, refused to house her. They persisted in their refusal even when she presented again, turned away from her alternative accommodation, and now with a newborn baby.

The Law Centre's argument was about timing and circumstances: essentially, the legal team argued, the birth of her baby has broken the 'chain of causation' between her earlier 'intentional homelessness' and her new circumstances when she applied again to be housed as a young single mum.

The Supreme Court has ruled in favour of Ms Haile by a majority of four to one. In their judgment, the majority justices also set out a new direction for interpreting the law on 'intentional homelessness'.

"I can't express how I'm feeling. I'm overjoyed [...] Hackney Community Law Centre have done an amazing job [...] HCLC have supported me for the whole 3 years from start to finish. Now I can plan a real future for me and my daughter."

Congratulations to Saba (pictured) and to her legal team: Nathaniel Mathews and Tayyabah Ahmed of Hackney Community Law Centre, Kerry Bretherton of Tanfield and Laura Tweedy of Hardwicke!

Click here for a summary of the Supreme Court ruling.

Click here for analysis of the legal significance of the case in Nearly Legal blog.

Click here for the story in detail from Hackney Community Law Centre.

Click here for a report in the local paper, the Hackney Citizen.