Protect the rights of migrants sleeping rough, we call on the government 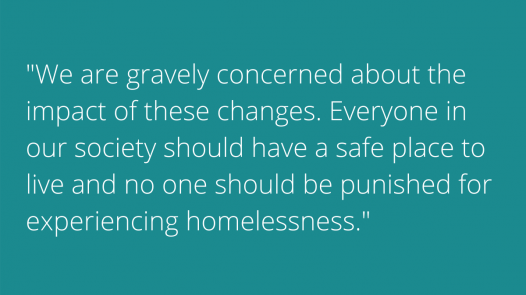 The Law Centres Network (LCN) joins over 60 homelessness, migrants and human rights organisations in condemning new government plans to use rough sleeping as grounds for removing non-UK nationals from the country.

The government had announced its plan last year, as part of its bid to toughen immigration and border restrictions after Brexit. The change in rules means that any EU citizens found to be rough sleeping could face deportation if they refuse support from authorities, such as an offer of accommodation or benefits, or if they have engaged in persistent anti-social behaviour or other criminal activity.

In recently published guidance from the government, an assurance has been made that the new ground will only be used sparingly for denying or cancelling a non-UK national’s right to remain in the country. However, many charities including Law Centres remain gravely concerned about the impact that these rules will have in practice.

The Home Office has wrongly targeted non-UK nationals for removal before. In 2017, EU nationals who had lawfully lived in the UK for years and were looking for work were deported following Home Office guidance which designated it as an abuse of EU free movement rights. Following a successful judicial review brought by a Law Centre, this was later ruled illegal by the High Court – but not before many had been wrongly detained and removed from the UK.

In a joint open letter (available below), we call on the Prime Minister to scrap the new plan, warning that there is a risk that victims of modern slavery, many of whom end up sleeping rough, may be deterred from seeking help in fear that they will be criminalised, rather than recognised as victims of crime. As the letter asserts,

“It puts people at risk of exploitative work, accommodation, and potentially modern slavery, to avoid sleeping rough and putting themselves at threat of removal from the country.”

“Everyone in our society should have a safe place to live and no one should be punished for experiencing homelessness. This policy undermines this principle. It is inhumane and will make non-UK nationals in vulnerable circumstances fearful of asking for the support they need to get off the streets.”

Scrapping the plan will ensure that everyone can access homelessness support without fear and will build on recent progress on resolving homelessness during the pandemic.

In the Evening Standard

In the Big Issue